The Terciopelo cave has its name from the fer-de-lance snake (span. terciopelo) which was found dead on the bottom of the entrance when the cave was discovered. In general however there is no animal life in this cave. 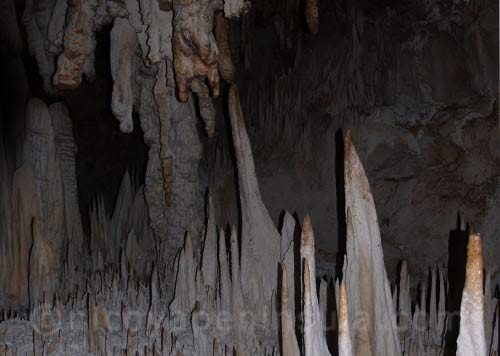 You should wear long pants and sturdy shoes with good grip as the ground in the caves is very slippery and you have to climb over broken stalagtites and rocks. Visitors shouldn’t have fear of enclosed places and some openings to caverns are narrow, so it might be difficult or impossible for big people to pass through.

You enter the cave on a 17 m descent on a ladder, to arrive in the entrance hall. From here you continue your descent through this first hall until you reach its bottom, 30 m below the surface.

Another descent on a ladder brings you to the next cavern: the sala de huevos fritos (fried eggs cave) which among other curious formations features stalagtites that resemble fried eggs.

To get to the third chamber you have to pass through a narrow opening. The bizarre limestone formations found here are compared to popcorn, roses, grapes and shark teeth.

Since the 2012 earthquake the following two chambers have been closed to the public due to security reasons. The fourth cavern, the Sala Organos featured an enormous formation of hollow stalagmites. By tapping lightly on the hanging formation you could hear clear musical notes. Still further down, passing through a very narrow opening and climbing down another ladder, you could get to the fifth and last chamber: a high-ceilinged hall, 60 m below surface.